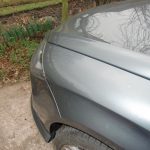 It’s curious but true that dent repairs in Wilmslow is often not considered until time to get rid of the car. Whether you’re selling your car, using it as a trade in on a new one or turning it in at end of lease, you now notice the dents. Usually the dents accumulate over time while driving a particular car are minimal. If they had been major, you would probably have had them fixed. Likely your insurance would have covered most or all of the considerable cost. But, they won’t pay for these small dents and creases that are not caused by a serious accident. You may not even know when some dents occur. Maybe something’s on the roadway and flips up and hits the car as you drive over it. Or, perhaps you remember getting too close to that pole with your rear fender.

Now, you want to fix those dents but you don’t want to pay a body shop a lot of money. In Wilmslow, dent repairs may not have to cost a lot of money. We’ve been repairing dents for 20 years at low cost. If the dent does not break through the paint, we have the tools and techniques to pull the dent out and leave a smooth surface. There is no need for pounding out, putting filler in, sanding and painting. Paintless dent repair, for small to medium dents, where there is no structural damage is a better solution than body repair or replacing a whole panel. It’s fast and inexpensive. It also works beautifully when carried out by experienced technicians using professional tools.

As some have learned the hard way, dent repairs in Wilmslow is not a do-it-yourself job. Just because you can successfully plunge a toilet does not mean you and your handy plunger can fix car dents. Nor is a car dent repair kit sold off the shelf a smart idea for your dent repair. You will likely do more damage. You first need the right tool for size and location of the dent. How well stocked with the various equipment are you? Then comes just the right technique, angle and pressure to achieve the pop. Inexperience is likely to cause more damage. Contact Dent Experts and leave it to us. The process is quick and inexpensive and the results are a smooth finish.