Paintless Dent Removal in Hindley for an Excellent Finish 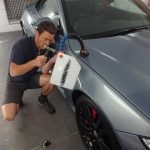 Paintless dent removal in Hindley works like magic when Dent Experts are on the job for you.

A perfect dent removal is dependent on two things; the skill of the technician and the condition of the paint. If the auto manufacturers sold paint-it-yourself cars, there would be a lot of late model rust buckets. It would take only a few rainstorms coming into contact with the car metal for oxidation resulting in rust to get a start. Once it starts, it spreads. That’s why car manufacturers pre-treat the bare metal with a corrosion resistant paint adhesive and an E-coat pre-treatment. Next comes the primer coat that smooths the surface of the metal and is resistant to chipping from stones and such. The basecoat is next which is the colour. It’s also the thinnest of the 4 coats of paint.

The transparent clear coat is the thickest of the four layers and provides damage resistance. In Hindley, paintless dent removal depends on the damage not reaching bare metal. For minor dents, dings, and creases, the paint usually stays intact. It’s also pliable enough that we can pop that dent out like it never happened. Door and bumper dents caused by unknown drivers in car parks, stones thrown up from the road, opening the door too close to a post are just a few of the many ways our cars get dented. You don’t want to get major body work to fix these dents because it’s too expensive. Some people just ignore the dents. Many others use our paintless dent removal services.

Those we count among our customers for paintless dent removal in Hindley are car dealers. They take a great car in on trade or buy it at auction but it’s got a few dents. They want those dents gone so they can sell the car at a good price. Those who lease cars appreciate our services at the end of their lease. If you rent a car for a week and dent it, bring it to us and you can return it without fear. Anyone who takes pride in their car because it’s an expensive high-performance sports car, a high-end luxury car or just because it’s their car, use our services. Contact Dent Experts and we’ll come to you. We have the equipment, our time is flexible and we have the skill to remove dents as long as the paint is not cracked at the metal. It only takes a short time and your car will look great again.