Dent Removal in Flixton – Maintaining the Value of your Car 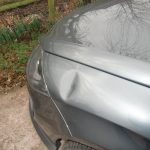 If you care about maintaining the value of your car, dent removal in Flixton should be on your to-do list. It’s best to tend to a dent right away because over time the damaged area can deteriorate. So often car owners wait until they’re ready to turn their leased vehicle back in or sell the car. If you’re driving a high end luxury car or sporty performance vehicle, you probably take care of dents right away. It’s likely you go to the body shop and pay dearly to have the small dent or ding removed.

For all car owners, regardless of your car’s value, you can benefit from paintless dent removal. In Flixton, dent removal of shallow dents and dings can be carried out by us. You won’t need to involve your insurance company or go for days without your car. You don’t even have to bring the car in; we’ll come to you. Our equipment, technique, skills and experience is portable. We’ve been doing this for over 20 years. Send us a picture of your dent and we’ll tell you if it qualifies for paintless dent removal. If so, we’ll schedule a time to come to you at your convenience. We are available seven days a week. The technique is so perfect that no one would even suspect there was a dent when we finish.

Dent removal in Flixton using paintless dent removal is effective on those dents our cars are subject to everywhere. You may have been reversing so slowly you barely touched that pole, but it dinged your fender. Your car is the one parked next to the line hugger who uses both feet to open the door all the way and bangs yours. Hail damage is everybody’s nightmare. Don’t worry about those mishaps anymore. Contact Dent Experts and we can do same day dent removal. There’s no fillers, paint mixing, or new parts to order. Moreover, we can remove those dents and your car will look like new. Truly, you’ll see no trace of the damage.