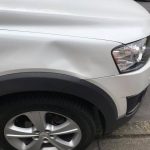 Dent repair in Alderley Edge doesn’t have to be a major undertaking or expense.

At Dent Experts, we have been practicing the art of paintless dent removal. We achieve this remarkable result through mastery of PDR equipment and technology. We emphasise the need for mastery because a do-it-yourselfer can do damage. Our team has 20 years of success. We’ve repaired thousands of cars including treasured sports, luxury and classic cars. Some of our customers utilise our services for their leased or rental cars to remove dents before turning the car in. Most of our customers are ordinary people who want to maintain the appearance and value of their vehicle.

You may wonder why our system of dent repair is in such high demand. For car owners in Alderley Edge, dent repairs can be very expensive at a body shop. One of the reasons for the cost is the need to fill the dent and finish it off without a trace. That is tedious and time-consuming work. Once that process is complete, the area must be repainted. That’s even more tedious and time consuming because most cars have between 5 and 7 layers of paint. You still have to do all that to repair a dent that is deep and breaks through the paint layers. But most dents don’t break through the paint. They are minor dings and dents from low speed fender benders, door bangs in parking lots, kids playing around parked cars, stones kicked up while driving and more.

That’s why the method of dent repair in Alderley Edge that we use is called Paintless Dent Repair. We can pull the dent out and the paint is undisturbed. It’s difficult to match paint and repair a dent so nobody can spot it. With PDR, we don’t have to. When we remove the dent, no one can tell it was ever there. We are on call and working 7 days a week. We cover the whole of Stockport, Manchester and Cheshire with our mobile service. Contact Dent Experts and send a photo of the dent you need repaired. We’ll call you back with a price quote and schedule a time. We come to you with our mobile paintless dent repair service. Our team can accomplish most dent removals in less than an hour.