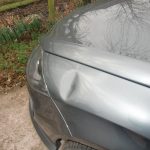 One of the busiest times for dent removal in Northenden at Dent Experts is after a hailstorm. We know a lot of you have been in the unfortunate position of having nowhere to hide your car when a sudden Spring storm arrives. With the storm is 5 minutes of golf ball sized hail. All you can do is stand there and watch it pinging the roof and bonnet of your car. Maybe you had your classic car out for a cruise on that warm Spring day or you left your new car parked on the street. Even if it’s your five year old minivan, nobody wants dents in their car. You planned to trade that car in and need to get a good price.

Have you ever rented or borrowed a car only to have a momentary brain blip and hit something with it? In all these situations in Northenden, dent removal by Dent Experts can save the day, a lot of money and your reputation. The reason is that it’s likely in such situations that the paint is not damaged at all. Therefore, we can use a combination of specialised tools, techniques and skills to gently pull the dent out. To get that metal back to a flawless finish takes an experienced touch. The technique is called paintless dent removal (PDR) and it’s a service we have been providing for over twenty years.

We’ve seen the rippled bumpers and door panels caused by do-it-yourself dent removal in Northenden. Maybe you have too. There’s not much we can do about it. It’s just proof that dent removal needs the professional touch. So, trust us, our rates are reasonable and the results are worth it. Contact us today for more information on how we can assist you. Bring your car with a dent or dents to us and get the job done right. Paintless dent removal is for dents and dings that don’t crack through the paint. So don’t let anybody replace your whole panel or sand down and repaint the door just to remove a dent. That will cost you serious money. We can take care of it for you in no time.