Dent Removal in Westhoughton – Keep Your Car Looking Like New 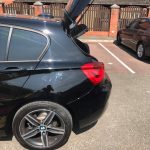 Dent removal in Westhoughton can be less catastrophic than you might imagine.

We’ve been removing dents, even big ones, using the latest techniques for decades. We don’t pound dents out as they once called dent removal. That used to leave the area where the dent was looking like magnified orange peel. To smooth it out, they would bondo it; which means add filler. Then sand it all down and repaint it. That’s a lot of labour hours. When cars started being manufactured with bolt-on parts, garages would hit you or your insurance company up for a new fender, quarter panel or door. You would have to wait for it to arrive, then the mechanics would remove the dented part and snap on a new one. Then try to match the paint.

Snap-on parts to repair dents is still labour intensive and the parts are expensive. In Westhoughton, dent removal using those techniques could always be spotted by savvy car buyers. Car sellers would tell you the car has never been in an accident while clearly the paint is not perfectly matched or there’s the slightest little ripple. The protective paint used on cars today is applied in many layers with a tough finish. The paint seals your car against rust. Today’s paint products have a flexibility to them which prevents it from easily cracking. If someone slams their car door into yours at the car park and dents it, we can gently ease that dent out to a smooth surface. There’s no fillers and no repainting. It’s a beautiful thing to see.

Dent removal in Westhoughton is possible as long as the paint isn’t cracked down to the metal. We ease the dent out and the paint is still intact, there’s no worry about rust setting in. There is no major bodywork required. So, when you spot the dents and dings as you are preparing to sell your car or return it at lease end, call us. We can probably remove it for less than your insurance deductible would be in conventional bodywork. And, it’s a quick procedure. We work on all cars so if you have a car you are very proud of and can’t bear to see dents and dings, contact us. We’ll keep it looking like new.